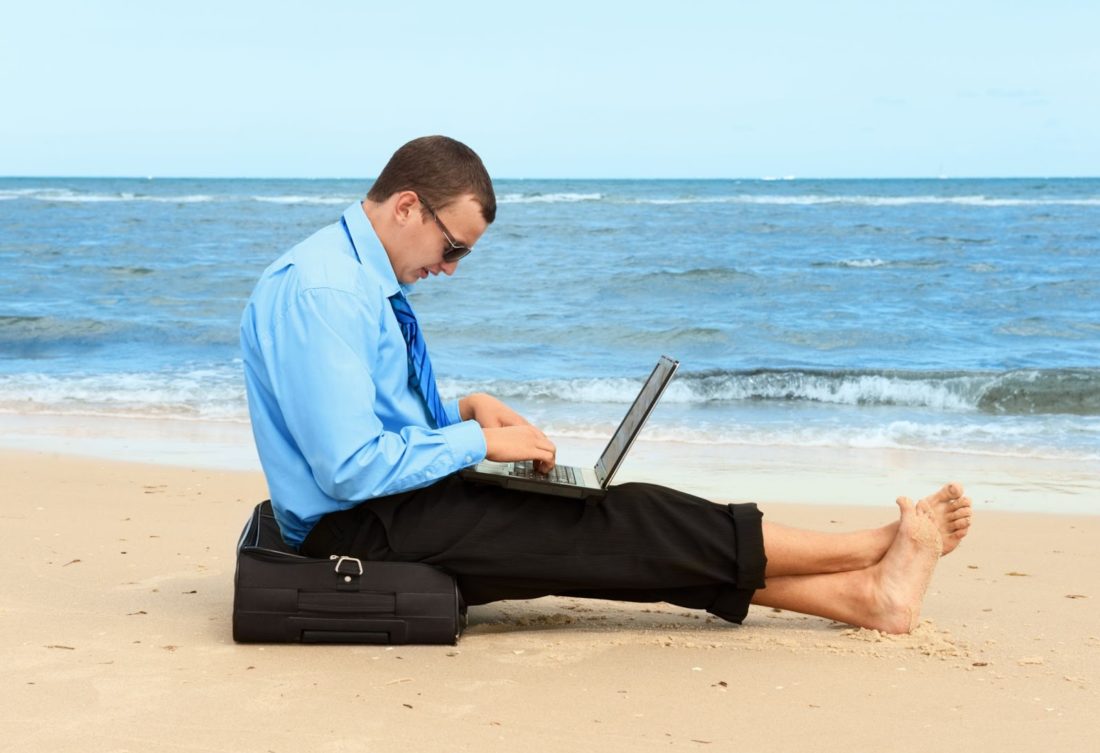 This guy looks so uncomfortable. He’s either trying too hard to work on vacation or not trying hard enough to blend in at the beach. It’s weird. Not offensive per se. Just weird. Anomalous. Even silly. Judging these kinds of behaviors is what humans do. It’s how we maintain a locus of ordinary in specific social settings.

Now, if this guy were sitting in the office lounge with his socks off, it would ALSO be weird, but for different, context-specific reasons.

In Ramping Your Brand, I write (or talk if you like Audible) extensively about making your brand as memorable as possible, both in its design and how you woo customers. I also talk about weirdness as a form of memorability that you don’t want. Believe it or not, though, ‘weird’ is an interpretive designation. For example, it may be true that most yogurt consumers in 2006 would have thought Siggi’s was weird because it was incredibly sour (i.e., low sugar content). Over time, though, the attitudes of urban consumers transformed concerning the sugar content of their food especially added sugars or just plain insane sugar levels commonly found in processed foods in the 2000s.

Siggi’s had two weird attributes – the Icelandic word ‘skyr’ on its label and its ‘very sour taste.’ The word ‘skyr’ is only odd because it’s meaningless as a varietal designator. Or it was pointless. It’s not ideal, but it’s not a fatal form of weirdness for a new CPG item. It just adds nothing other than more questions. But the sour taste was a barrier to repeat and word-of-mouth, and it slowed initial velocities per Siggi’s premium yogurt peers.

I bring up this brand because it’s a reminder that you don’t necessarily want to give up on a brand with a weird sensory attribute, IF…IF…the long-term megatrend seems to be working in favor of consumers adapting to the weird attribute as a high-value trade-off. In the case of a sour taste for fewer grams of sugar, this eventually became an acceptable trade-off in urban food culture in North America. It is even starting to gain currency in indulgent categories known for high sweetness levels (e.g., Foodstirs).

Sometimes, you stick with a weird product line because of a long-term understanding/bet. However, other times, you simply need to alter your playbook so that consumers encounter your brand first in a forum in which you can bury the weird. Or simply re-define it as cool. This is what Dr. Squatch did with its cold-pressed bars of soap, the same ‘hippie’ fare sold for decades at health food stores and which never scaled. They did this by burrowing deeply into an early niche of male, blue-collar consumers who loved the gritty scrub and masculine smells of these large-sized soap bars. Then, the brand produced creative ads aimed just at this group, betting that other men would identify with this hyper-masculine re-appropriation of an old health food item. And it worked incredibly well. Dr. Squatch made natural, pressed soap unweird in a matter of two years. Sometimes, it’s simply highlighting more optimal attributes and outcomes and burying others that only hurt the cause of growth.

Make sense? Hey, if you want to get your fans to let you in on the key attributes and outcomes driving your brand’s success, I urge you to take my most popular course right here on my website.