Please leave a review on iTunes 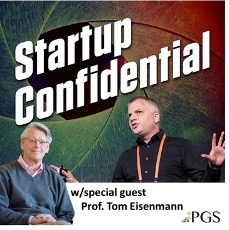 Hey everybody, I have a very special guest with me. This time on Startup Confidential, he is the Howard Stevenson Professor of Business Administration at Harvard Business School, Tom Eisenmann. He is also the Faculty Co-Chair of the Arthur Rock Center for Entrepreneurship at HBS. He’s been there since 1997, core unit economics.

I mean, you talk about business model issues in your book. You had some examples of poor unit economics in the tech world, which I found fascinating because I think I’m just so tired that I assumed they all had a 90% gross margin. After all, they all have Harvard MBAs, and they wouldn’t be stupid enough to do anything with less than that. I think I wrote that in a blog post. I now have to go and delete it. So apparently Harvard, MBAs will do shallow gross margin things.

[Laughs] Many entrepreneurs I work with, counterintuitively, their economics actually get worse as they grow because there’s a sweet spot, early adopters who love their product, who will pay a high price, who are not expensive to serve because they’ll self-provision and sort of put up with your shoestring and bubble gum without a lot of complaints. And as you move away from that sweet spot to the mainstream, basically to get the next set of customers, as opposed to word of mouth marketing, which sort of drove the early folks, now you’ve got to pay for promotion and advertising and so forth. You may have to discount the price. Your very growth has attracted clones and entrants and so forth, till basically you’re in this constant price and cost squeeze as you grow in a lot of the tech businesses. So packaged goods seem to me, to actually get better as you grow. I mean, you get meaningful discounts in manufacturing, the slotting allowances you had to pay like crazy to get attention in the beginning, or not in the very beginning, but as you expand, you’re doing less of that as you keep going. At least in these sometimes fabricated, sometimes real case studies at Harvard Business School, the unit economics are very, very important, but they actually improve, I think, for a lot of these growing food and beverage companies.

Here’s the thing. In the world that I’m in, most people don’t have an MBA and found these businesses blows me away. Now, increasingly they have a business background, and I think that actually does help to your point earlier, but that’s what I do find. They cannot manage the cashflow nightmare of being 40% negative EBITDA for the first year or two at that tiny scale. It can get even worse than that. The manufacturing minimums are just insane in some of these, and they’ve gotten worse during their pandemic because the guy’s like, “I don’t need your damn run rate.”

What we don’t teach our MBAs enough, which I think is just, blisteringly important in your world, is working capital. You know, it takes a lot of money to build inventory. And when you sell to these big folks, they’re going to pay you back very, very slowly. You know, it’s a squeeze in all directions.

Did I share in my book, the part about getting paid in four months and then getting 10% of what you thought?

No, I didn’t see that, but it rings true.

Here’s one you can terrify your students with. It’s not uncommon, if you do third-party distribution, Tom, to say Safeway, where they [the distributor] will basically book you for distributor catalog ads, trade show appearances at their trade shows. I’m talking, these are fees that are like 10, 20 grand a pop, 30 grand for ads, and then mandatory promos, which, [crosstalk 00:03:40]. Right, you saw it, you sold them $250,000 worth of stuff. And you get a check for like 50 grand. This happens all the time. And that’s why I talk about those ridiculous EBITDA that are like, “Oh, my Lord,” but what I was getting at, is that because food is a manufactured good, it’s actually a highly technological and very slow-twitch manufacturing ecosystem. You don’t snap your fingers and get a Co-Man to retool a line for you. This is very hard to get happen, right?

I meet a lot of founders who get bullied into screwing up their formula to meet the co-manufacturers’ specs, which is basically code for, “what I can easily do for you, because you don’t matter to me.” And then, on the other side, it is possible to actually slowly pilot and scale up your own thing, and I know 10 guys doing that. And it’s capital intensive, but you know what? The funny thing is it totally, it achieves one thing my book preaches, right? Which is don’t scale fast. Have a high growth rate, but don’t scale fast because you can’t possibly do it if you’re building the planet yourself.

Yeah. It was always, we taught Honest Tea and they did it. They built their own factory. We were always completely confused why. Why would you do that? Certainly, somebody can, you certainly, you can outsource that, but there you go.

Here’s one I want to talk to you. Here we might even have to debate because I do like your challenge in the book, which is called, “Why Startups Fail” and available on Amazon.com right now. One of the sources of False Positives you talk about is not doing really good pre-revenue market thinking. Boil down for us, what you talk about in terms of what is worth researching in advance versus what’s worth waiting for the market to tell you about your thing.

So, let me isolate things you can learn in advance and things you can’t. The things you can learn in advance are something about unmet customer needs. We’ve got a dog walking service in the book, and if you’re going to launch a dog walking service, you better spend a lot of time talking to families about how they walk their dog, how their dog gets walked. How important is the trustworthiness of the stranger you’re letting into your apartment? How important is their knowledge of your pets’ peccadillos and in your family’s preferences, how important is flexibility? Both husband and wife are traveling, and you need somebody who can sort of flexibly do that dinner time walk and et cetera, et cetera, et cetera. You can learn a lot about it. And if the sort of dominant mode of pet care is just these independents who sort of manage to somehow attract a book of business, you can find out a lot about what doesn’t work and maybe about solutions that would better satisfy.

I don’t think there’s any question you can learn about unmet customer needs. When the needs are latent and people can’t really articulate them because the thing you have in mind is something you’ve never done before, that’s obviously tricky.

You hire the anthropologist. Right, Tom?

So there’s a thing where you have trouble. The other two aspects of this. It’s not necessarily focused on the customer value proposition, the problem and the solution. But a lot of businesses only work if you can actually execute them. As an example in the book, I have a couple of founders who launched an apparel company, not too far from the world you live in because there’s inventory and it’s a very physical thing. And it turns out that, and like, I think food and beverage, there are all sorts of specialty functions. There’s a pattern cutter, there’s a fabric sourcer, there’s quality. And all of these people have to do their thing in sequence, and it all has to mesh together. If you’re doing a startup with people who’ve never done it together before, and you don’t have the systems that are at an Ann Taylor, all hell can break loose. So, these poor entrepreneurs had validated, actually, the concept they had was young, professional women have a hard time finding stylish, affordable clothing that fits well. The emphasis being the last part. You can find any two of the three, but getting all three is a hard…..

Maybe, yeah. But anyway, so the secret sauce was a sizing scheme instead of size 6 or size 10, they were going to do it like men’s suiting where chest size and a sleeve length. And they’ve only compounded their execution challenges now by doing it, there’s a reason why women’s clothing isn’t made like that. It’s hard and they’ve never done it before, and they hired a bunch of industry veterans who came out of places where, “I was a fabric sourcer, I don’t know anything about pattern cutting,” So they did the Jack of all trades behavior that you’d get in an early-stage startup. They just sat on their hands and said, “I don’t know how to do that. It’s not my job anyway.”

So you can’t test in advance the ability to execute a complicated business. That can’t be done. The other thing you can’t do in advance, which I think is closer to where you’re probably going to go, is repurchase, right?

You can do all sorts of clever things to sort of get, figure out whether people will purchase, and you can put facsimile of the product in front of them. You can put the real product in front of them, but most businesses don’t work unless there’s repurchase. And you just don’t know until you’ve seen it. And you’ve seen it enough times with enough people in the segments you’re interested in. So, shame on the entrepreneur who skips the part that I said you could do, which is basically isolate unmet customer needs, and you can explore different solutions for those needs. To get feedback from customers, again, if it’s a sufficiently familiar concept that they really are able.

Actually, it’s funny you bring that up because I was making some notes before this happened, and one of the things I was sitting there writing was, the only part of innovation work at big companies that’s ever had any value, that’s actually been proven to correlate to something is the servicing of an important area dissatisfaction in the consumption of that category. And it could be really nitpicky. It could be as simple as they don’t want to spend four minutes heating it. They’d rather have it be 90 seconds. That could unleash a billion dollars. Something that simple. And you have to have a certain kind of interview and rapport to get that out of people. And you do have to do things like play the devil’s advocate. Cause people will pretend that they’re not lazy. They will pretend that they’re not cheap asses. They will pretend that they’re all sorts of things to a stranger. And having done field research in India, I can tell you that America has this illness real bad. Pretending to a stranger that we’re all sorts of weird things we have no intention of being.

And entrepreneurs are subject to all of that. And one more thing that’s even worse, I think, than the typical corporate type, which is they can’t resist the impulse to pitch, right, when they should be learning about the customer. They just can’t resist the urge to pitch, “Here’s the thing I want to do. And here’s why it’s great. And don’t you want it?”