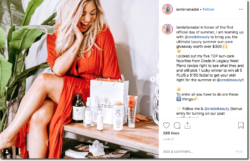 What is ‘influencer marketing anyways’? And is it dying of inauthenticity and rampant fraud? Is ‘marketing’ even the right descriptor here?

It’s well known that many ‘influencer’ campaigns fail to do anything other than build awareness in small lifestyle tribes. Not worthless by any means, but if it’s awareness that isn’t memorable enough to create repeat, habitual users efficiently, is it worth all the fees?

There are MANY variables behind these failures, the most common being picking a sh*t influencer, a poseur who, you guessed it, has little real influence (i.e., persuasive skill).

The Founders of Mid-Day Squares offer a bold counterpoint to the cynics on a recent podcast episode: the best influencers are running ‘shopping channels’ (i.e., like QVC) that younger cohorts actively follow TO SHOP FOR FOR SH*T. The latter is what the old farts like me have struggled to understand until recently.

The challenge with influencer marketing has been that a literal army of primarily female influencers just appeared and started taking payments from clients whether or not they could establish their ability to:

b) Build awareness significantly in a local market.

c) Enhance brand memorability through storytelling or any other quantifiable business outcome.

I’ve seen clients with seed investment funds hire $50,000 worth of ‘influence’ and not necessarily be able to measure much at the end. Or not have a strategy for the use of influencers based on clear business objectives.

Or not vet their influencers (or influencer agencies) for real business outcomes consistently generated for clients. The world of vegan influencers is just plain over-crazy-full, folks. And some of these folks aren’t very good rhetoricians. They are shrill ideologues instead. And they often have a following of equally shrill vegan ‘diet fascists’. This is an extreme example of paying to influencer category geeks (who would have discovered you already) instead of paying an influencer to build enthusiasm among status buyers and pragmatic adopters (see my book for definitions!).

Not being set up to manage the click flow to your Shopify site would be a colossal disaster, they rightly point out. Among other things.